The Xiom Vega Pro, released in 2009, is one of the most popular offensive rubbers available. Ever since its release, It has garnered a reputation as an excellent forehand rubber.

We bought and thoroughly playtested one sheet of this legendary rubber to find out its strengths and weaknesses more than ten years after its initial release.

Xiom have since released an updated version of the Vega Pro called the Vega X. You can also check out our Xiom Vega X review.

Perfect for: Intermediate and advanced offensive players on the forehand side, and advanced offensive players on their backhand side. 1-15+ years of playing.
Serve
Drive
Loop
Block
Chop
Benefits
High speed levels.
Linearity.
Superb for loop kill shots.
Good rubber for looping.
Great flat hitting, driving, and blocking rubber.
Stability, firmness, and consistency.
Price.
Good for touch play.
Drawbacks
Not as much spin as ultra-offensive rubbers.
Its long, direct throw can be unforgiving.
4

We recommend the Xiom Vega Pro to players who want to attack their opponents with fast, direct shots.

Design of the Xiom Vega Pro

The Xiom Vega Pro comes in a high-quality sealed package.

Inside, we can find the rubber. We bought the rubber in black to use as a forehand rubber.

If we rub our fingers across the rubber, we find that it’s slightly tacky and quite grippy.

One attribute I love about the Xiom Vegas is their black sponge.

This is down to personal preference, but in my opinion, they have the coolest sponge color in all of table tennis.

Speaking of the sponge, upon pressing on the rubber, we find that it offers quite a bit of resistance.

Xiom states that the sponge of the Vega Pro is 47.5 degrees, which would make it a medium-hard rubber.

In play, the Xiom Vega Pro does feel quite hard. It feels harder than other rubbers in the same hardness range such as the Nittaku Fastarc G-1 or the Yasaka Rakza Z.

The Xiom Vega Pro weighs in at 49 grams, which I think is very reasonable for a high-end, medium-hard rubber. 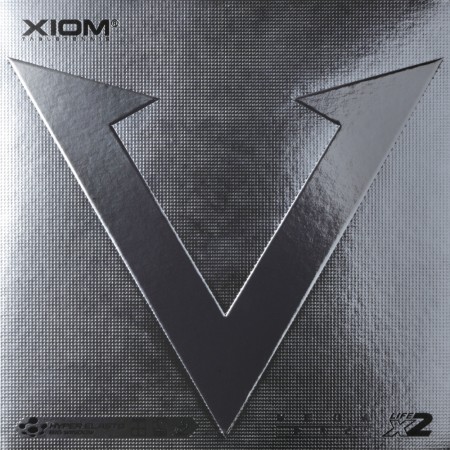 I tried the Xiom Vega Pro mostly on my forehand side.

It plays like a quite hard, fast, direct, medium throwing rubber.

The Xiom Vega Pro was designed to excel on these two shots: drives and loops.

Drives with this rubber are excellent because it is a fast, direct, medium-hard rubber. The rubber has great stability.

Driving with this rubber instills confidence and it’s a superb rubber for flat hits as well.

Loops with the Xiom Vega Pro travel with a very long arc and have more speed than spin.

In fact, when I began my testing I had to make several adjustments as I kept overshooting the table over and over.

When testing the Vega Pro, I was using the Butterfly Tenergy 05 on the forehand side of my main racket, and I can safely say that the Xiom Vega Pro has a much longer arc.

Loops travel with a lot of power, but they’re also slightly unforgiving. The rubber is spinny, yes, but its speed levels are greater than its spin levels.

This effect makes it easy to overshoot the table if you don’t hit the ball quite right.

However, it’s not nearly as unforgiving as rubbers such as the Hurricane 3 NEO. It’s just that it’s a bit more unforgiving than a regular ESN rubber like the Fastarc G-1 or the Donic Baracuda, for example.

Here’s a clip demonstrating the sheer power of the Xiom Vega Pro.

The Xiom Vega Pro is also a great rubber for countering, both close to the table and away from it.

It’s easy to pass opponents with counterloops because of the Vega Pro’s speed.

It’s also quite a controllable rubber when it comes to counterlooping because of its hardness level. The Vega Pro feels nice and stable.

It is medium-hard, linear, and fast. All of these characteristics make the Vega Pro ideal for counterlooping, given that it has good speed but the rubber feels perfectly safe and predictable.

In addition to all this, the Vega Pro isn’t as reactive to incoming spins as other spinnier rubbers.

As for counterloops away from the table, the Vega Pro has more than sufficient speed to play comfortably from longer distances.

It’s a good rubber for counterlooping in general, although you have to get your racket angle right so that you don’t overshoot the table.

Open-ups were good. If you brush upwards on the ball, you can get spinny loops with good control. I’d say the spin generated on open-ups is about average for an offensive rubber.

As you can see in the clips, the Vega Pro is much better at follow-ups than it is at open-ups.

The Vega Pro is a formidable 5th ball attack rubber. If you open up with spin and get a block back, chances are that you’ll finish the point on the follow-up attack.

The Vega Pro is made for direct, fast loops, so if you catch any ball higher than net height and hit forwards, you’re going to cause lots of trouble for your opponents.

In terms of serve and receive, the Xiom Vega Pro worked as expected.

The spin generated on serves was average. I feel that with an offensive rubber such as the Vega Pro, serves need to carry heavy spin in order to set up opportunities to attack.

The Vega Pro isn’t a particularly good serving rubber. It’s not bad, but I wish it was better. Other rubbers such as the Fastarc G-1 work a lot better in this regard.

I think that the Vega Pro is one of the best rubbers for the forehand flick I’ve tried. It has the perfect hardness, sufficient control, lots of speed and it’s not overly reactive to incoming spins.

In these areas, the Xiom Vega Pro surprised me for the better, especially when it comes to blocking.

The Xiom Vega Pro is an excellent rubber for blocking because of its speed and its throw angle.

You can go for active blocks with confidence because of the Vega Pro’s hardness range, and its speed levels and throw angle make it a very dangerous rubber to actively block and punch with.

In terms of chops, the Vega Pro performed relatively well. It is an ok rubber to chop with. You can’t generate that much spin but it’s relatively controllable and you can pull off the occasional chop with it.

Alternatives to the Xiom Vega Pro

A higher throwing, faster and spinnier rubber. It’s a great step up from the Vega Pro.

A faster, spinnier version of the Vega Pro. Both rubbers are great for direct shots.

The Xiom Vega Pro is a good offensive rubber.

It is a fast rubber with good control and enough spin for its speed levels. Its main quality is direct shots. Flat hits, hit loops, and follow-up attacks are great with the Xiom Vega Pro.

Another advantage of this rubber is its price. The Xiom Vega Pro can produce high-quality shots, and, at the moment of writing this article, it’s the cheapest “high-performance” ESN rubber.

The Vega Pro is a standard offensive rubber that’s characterized by its high speeds and its direct throw.

Because of all this, the Vega Pro is an excellent choice for attackers who value speed over spin and don’t want to spend too much.

Find out how much the Xiom Vega Pro costs on Amazon

Find out how much the Xiom Vega Pro costs on a localised Table Tennis store.