When playing out points, most of the rules of Table Tennis are clear since they’re quite intuitive. Fail to make a proper return and you lose the point. It’s as simple as that.

This is not the case with serves. Table Tennis serves must comply with an intricate set of rules. Most casual ping pong players serve illegally, and they don’t even know they’re doing it.

Thus, misunderstandings happen quite often, since enforcement of the rules by different umpires can be inconsistent.

For example, in the Rio 2012 Olympics Women’s Final, Ding Ning lost a total of 3 points from illegal serves, even though those same serves were called legal on other matches by different umpires.

Based on our umpiring experience and summarising rules straight from the ITTF Handbook, we’ll cover every serving rule to help you serve legally and steer clear of any problems.

1) Stay behind the table

Before initiating your service, make sure that you’re behind the end line.

If you throw the ball or contact it over the playing area, then it’s an illegal serve, and you could get called for it.

In addition to this, make sure that the ball is dry. After playing for some time, especially when it’s hot, both players will start to sweat, and this can get the ball wet.

If the ball is wet, rackets can’t grip it, the ball just slips. So check that the ball is dry before serving.

2) Start in your palm

To serve legally, you will need to hold the ball behind the end line and above the height of the table. Your opponent must be able to see the ball at all times.

You will need to rest the ball on the palm of your free hand. The hand must be stationary and completely open. This is so you can’t put any extra spin on the ball with your fingers when throwing it.

Also, remember to check that your opponent is ready before initiating your serve. Some players need some extra time to prepare themselves to receive.

If your opponent is not ready to receive and you serve, it’s polite to call a let serve.

Here are some clear examples of serves that fall foul of the first 2 rules:

Instead, your serve should start with the following position. Note that slightly cupped hand is acceptable to prevent the ball from rolling off your hand.

After making sure that your opponent is ready to play the point, you can initiate your serve.

According to the ITTF Handbook, you must throw the ball near vertically upwards at least 16cm without imparting any spin on the ball. If you’re unsure about how much 16cm is, it’s about the height of the net or the width of your racket.

This is where the controversy begins since a “near vertically” upwards throw is judged by the referees. Some referees are quite lenient when interpreting the rules, while others are quite strict.

Almost all Table Tennis players don’t throw the ball 100% vertically upwards, since throwing it towards your body gives your serve an advantage. It’s a lot easier to impart spin to the ball if it’s falling towards your racket.

According to the TTR system used in the 2019 ITTF Grand Finals, an illegal serve is one in which the server throws the ball towards themselves at an angle of more than 30 degrees. This angle is measured from the moment the ball leaves the hand until it reaches its peak.

So if you like throwing the ball towards you, try to project it high enough so that the angle of the throw is 30 degrees or less.

The main takeaway is that you don’t try to gain an unfair advantage by throwing the ball towards you. The rule was implemented so that you don’t throw the ball straight into your racket, really.

We recommend throwing the ball as vertically as possible, just to be safe. It’s sometimes hard to tell if our serves are legal, so you can film yourself serving and know for certain, applying the 30 degree rule.

While the ball is in the air, don’t hide it! Some old-school players still have the habit from times past, but it’s illegal now.

Hiding the ball was legal until 2003 and every player did it so that their opponent couldn’t see the moment of contact. This led to a lot of missed receives and shorter points because players often failed to read the spin on the ball.

The ITTF then changed this rule so that there are fewer unforced errors on the receive.

No one wants to watch a match where all the points are one player serving and the other failing to receive the ball. So it’s now illegal to hide the ball at any moment, whether it is with your arm, clothes, torso, etc.

As soon as you throw the ball upwards, you must remove the throwing arm from the space between the ball and the net.

5) Hit both sides of the table.

As soon as you throw the ball upwards, the point starts. So if you fail to hit it or you miss the table, you lose the point. This is why you need to make sure you’re 100% ready before throwing the ball.

You then have to contact the ball as it’s falling down.

If you’re playing doubles, then you have to hit it cross-court so that it bounces on your side of the table and then on the opponents’ right side. If it hits your left side or your opponents’ left side, you lose the point.

If you’re playing singles, the ball can bounce anywhere on the table. It doesn’t have to be cross-court.

If the ball bounces on your side, hits the net, then hits the other side, it’s a let serve, and there is no limit to how many let serves you can do.

Now that you know the serving rules, it’s time to apply them.

We’ve all played against players who hide their serves or don’t throw the ball high enough. Everyone knows it’s much more difficult for the receiver to return those serves.

It’s an unfair advantage, so don’t do it!

We highly encourage you to make a conscious effort to keep your serves nice and legal, not only so that they don’t get called as faults, but also for the sake of fair play.

How do you serve in Table Tennis?

There are 3 steps you need to follow to serve correctly:
1) Hold the ball on your palm, above the table, and behind the end line.
2) Throw it up vertically at least 16cm.
3) Hit the ball so that it bounces once on your side, clears the net, then bounces on your opponent’s side.

What serves are illegal in Table Tennis?

What happens if you miss your serve?

You lose the point. Unlike Tennis, you only have one serve per point. If you fail to hit the ball, dump it into the net, or hit it long, then it’s a point for your opponent.

What happens if my serve hits the net?

If your serve clips the net but is otherwise legal, then it’s a let serve. There is no limit to how many let serves there are.

However, if your serve clips the net, then bounces on your side again, or clips the net and goes long, you lose the point.

Do I have to serve diagonally in Table Tennis?

If you’re playing singles, you can serve anywhere on the table as long as it bounces first on your side and then on the other.

Who serves first in Table Tennis?

For official matches the initial serve is decided by tossing a coin.

Most amateur games will involve one player guessing which hand the ball is in.

His opponent then has to guess which hand the ball is in.

Note that serving first is not necessarily advantageous. Lots of players, such as myself, prefer to receive first.

Pro tip: If you receive first, then you’ll serve when it’s 9-9 or 10-8 in the 1st, 3rd, and 5th set, giving you the advantage of serving in the deciding moments of the most important sets.

How many serves do you get in Table Tennis?

David's been playing Table Tennis since he was 12, earning his first coaching license in 2012. He's played in national team & individual competitions, although he prefers the more relaxed nature of a local league match! After earning his umpiring qualification in England, David moved to Australia and started Racket Insight to share information about the sport he loves. 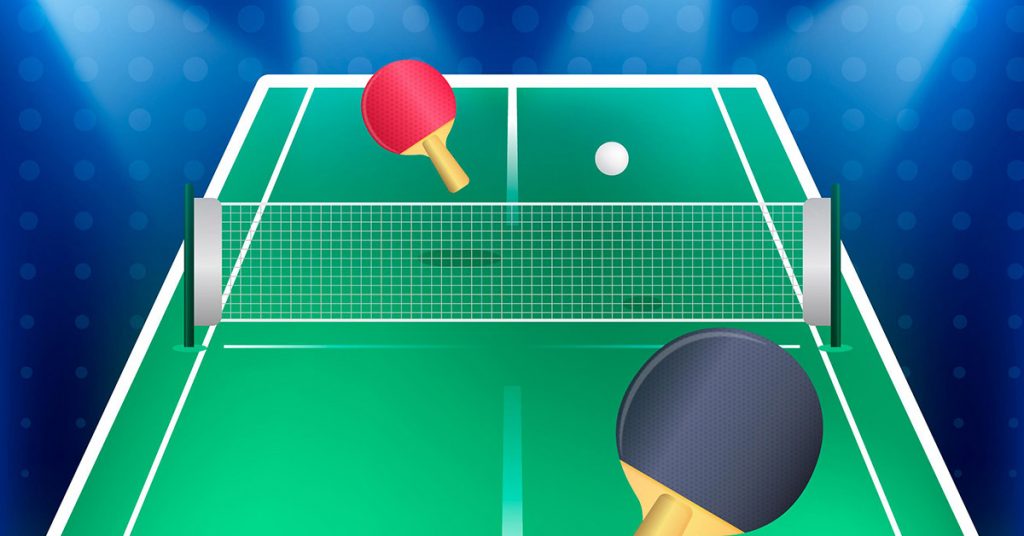