The Tibhar Evolution MX-P is known by the table tennis community as one of the best ultra offensive rubbers.

Many say that the MX-P is the fastest rubber on the market. Since I am an advocate of controllable equipment, at first I thought I would not like this rubber.

While testing it, I have to say it surprised me for the better and I understood why so many players use it. This rubber is quite balanced given its speed category, and, above all, it’s incredibly fun to use.

TIBHAR EVOLUTION MX-P REVIEW SUMMARY
The Tibhar Evolution MX-P is one of the fastest table tennis rubbers available. It makes your attacks a whole lot more dangerous because of its grippy topsheet and powerful sponge. The MX-P has very high spin levels and even more speed than spin. It feels effortless to play with this rubber since you don’t have to hit with 100% of your force to generate a powerful shot, as you do with Chinese or hybrid rubbers. On the flip side, this extreme speed renders the dwell time very short. As soon as the ball touches the racket, it is catapulted forward, and this can lead to unforced errors if the player does not have proper timing and technique. In the right hands, this rubber is a very dangerous weapon, and above all, it is lots of fun to use.

We recommend the Tibhar Evolution MX-P to players who want to overpower their opponents with sheer speed and spin.

Design of the Tibhar Evolution MX-P

The Tibhar Evolution MX-P comes in a sealed package, and inside we can find not one but two protective films.

Once we open the package, we find the ever so famous MX-P. It has a glossy finish, and it’s slightly tacky in addition to its high grip, which I didn’t expect.

When I grabbed it, I realized two things.

In the first place, the rubber felt very tensioned. This indicates that it is an offensive rubber packed with speed.

Secondly, I could detect a very strong smell of factory boosting. In addition to this, if we touch the sponge, it is slightly moist, which means this sponge has undergone intensive chemical treatment.

This is partly positive and partly negative. The factory boosting is going to give us a rubber with greater attack possibilities, but on the other hand, when the factory booster evaporates, we are going to be left with a significantly worse rubber.

I personally prefer rubbers that have sponges that are inherently fast due to their design as these do not degrade as much over time.

The MX-P is going to suffer a huge drop-off in performance when the booster evaporates, just like any boosted rubber. Users on Revspin say that after 1-3 months, this rubber is no longer the same as it loses most of its characteristic speed.

For those first 1-3 months, this powerful crimson sponge is going to make us very happy if we know how to take advantage of it.

If we press the topsheet, we will find a medium / medium-hard rubber. I would say that on the ESN scale, its hardness is 46 or 47°.

I cut the rubber and glued it to my usual blade, the Tibhar Stratus Power Wood.

The Tibhar Evolution MX-P weighs in at 51 grams, making it a heavy rubber. 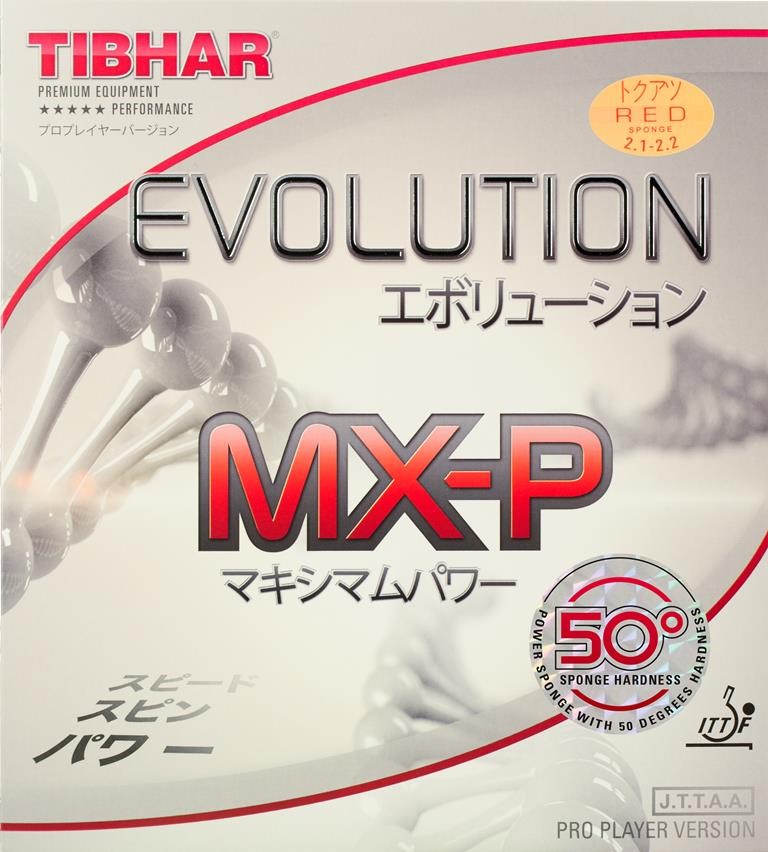 Summary: Overpower your opponents with one of the fastest high-performance rubbers in the market.

From the first hit, the MX-P felt loaded with energy, like a spring waiting to meet the ball and propel it forward.

Before talking about each one of its attributes in more detail, I’d like you to watch two clips in which we can see this rubber’s speed in full effect.

As you can see, the rubber is already super fast on a standard OFF- 5-ply all-wood blade. I wouldn’t recommend anyone who isn’t super advanced or even professional to use this rubber on a fast composite blade due to how little control you would have.

This is without a doubt the area of ​​strength of the Tibhar Evolution MX-P.

I wouldn’t say it’s good for controlled drives, as placement can be harder to control than with slower rubbers, but it’s one of the most powerful rubbers on the market for loops and flat hits.

When you hit the ball, the rubber produces a loud clicking sound, which makes you want to hit harder and harder.

This is one of the fastest rubbers I’ve ever tried, and its spin is almost on par with its speed.

Before trying the MX-P I thought that all the shots were going to come out extremely fast and that I was not going to have control of the rubber. Fortunately, that was not the case.

After a few minutes of adaptation, I was able to control the MX-P without any problems. I didn’t make any more unforced errors than with the rubber I usually use, the Rakza Z.

The MX-P is actually surprisingly linear for a rubber this fast. It has a lot of gears, and it is easy to tell when you’re engaging the sponge and where you’re not.

However, the dwell time is very short. You must be very precise at the moment of impact. If you’re not, your shots will go long or off the side of the table.

One thing that I found very positive about this rubber is that the sponge has lots of energy, but it is not incredibly hard.

The result is that it’s a lot easier to put power into your shots.

Throughout my testing, I realized that a normal loop with virtually any other rubber becomes a winning shot with the Evolution MX-P.

Every loop I executed was dangerous due to its spin or speed, and I would say 1 out of every 2 or 3 loops ended in a point for me.

If you perform a brush loop, the ball will go moderately fast and loaded with spin. In these shots, the rubber does not make the trademark clicking sound since the sponge is not engaged.

Brushing the ball on open-ups loaded the ball with spin and created opportunities for easy smashes.

If you perform a hit loop, the ball is going to go extremely fast and with a little less spin. This is where we see the incredible speed of this rubber and hear the satisfying clicking sound.

In this video, we can see this concept in play. There are loops that have more spin than speed, and in those, the sponge is not engaged, and the hit does not sound as much. There are other shots in which I hit looking for pure speed and the rubber sounds very loud.

Loops travel with lots of power and a medium arc, and my shots are a lot more direct than with other higher throwing rubbers.

It’s a matter of closing the angle and timing the ball correctly and the rubber does the rest. For counterloops, I recommend not impacting the ball too hard as that engages the sponge and you will overshoot the table.

Since the rubber is not very hard, it can also be used on the backhand side.

Here’s a clip of me using the MX-P on my backhand. As you can see, the rubber works perfectly, but you have to be careful not to mistime the ball, or else you will overshoot the table, which happened to me much more frequently on this side than on the forehand.

Provided you can control it, this rubber is a dream to play with.

In the serve and receive department, this rubber surprised me for the better.

I thought this rubber was going to be good for loops and that was it. I was thinking that it would be very difficult to maintain control when serving and receiving.

Receiving was fine and serving was even better. It is not that easy to serve the serve short since the rubber is very fast, but it is easy to put a lot of spin on the ball.

If you graze through the ball and don’t get a thick contact, you won’t engage the sponge, and consequently, your serves will be very spinny.

As for the receive, you need to have good touch. It’s a matter of reading the spin correctly and not contacting the ball too thick.

Because of its speed, it’s hard sometimes to touch short against spinny serves, but it is definitely possible if you manage to contact the ball delicately.

Pushing is fine with this rubber, and both the forehand and backhand flicks work great since the speed of this rubber makes it easy to lift backspin and get the ball to the other side.

Playing on the back foot is definitely not the intended purpose of this rubber. However, I gave a score of 4/5 for blocks and 3/5 for chops.

First of all, the blocks were pretty good. It is not that easy to control them due to the speed, but the rubber is not as spin sensitive as the Tenergy line, for example, and on top of that, blocks go with enough speed to trouble your opponent.

Although blocks can be difficult to control, if one places the ball properly, it is very difficult for your opponent to return the ball successfully due to the speed of the rubber.

This works great with all the other elements of this rubber. A good strategy is to try and execute active blocks. This way, you’ll generate chances to attack yourself. You can easily turn defense into attack with a good block.

Moving on to chops, it was tricky to get the ball on the table, but if you did, the opponent got a very heavy ball in terms of spin.

A great paradox in table tennis is that Tenergy, an ultra offensive rubber, is one of the best chopping rubbers. Joo Se Hyuk performed his legendary forehand chops using Tenergy.

This is replicated with the MX-P. If you have a good touch, you can produce heavy chops with this rubber.

Alternatives to the Tibhar Evolution MX-P

A slower, more controllable version of the Tibhar MX-P. Their playing characteristics are similar, but R47 has more control and dwell time.

The Butterfly Tenergy 64 is the closest rubber to the MX-P in terms of speed and throw angle.

In conclusion, the Tibhar Evolution MX-P is an ultra offensive rubber that has very high performance levels, especially in terms of speed.

However, players must be up to par with this equipment. Only players with good technique and timing should use it.

This is not a rubber you should buy if you are still learning how to loop. For that, we recommend alternatives such as the Yasaka Rakza 7 or the Xiom Vega Europe.

If you are skilled enough to make use of this rubber, it is a dream come true.

However, you must be willing to change your rubber every 2 months or accept that the rubber is going to have a big drop off in performance once the factory booster evaporates.

If you meet all the conditions, this rubber is perfect for ultra offensive players who find joy in hitting the ball as hard as they can.

Find out how much the Tibhar Evolution MX-P costs on a localised Table Tennis store.