The Vega X is one of the newest offerings by Xiom, advertised as the “best rubber in the Vega line”. According to Xiom, it is an improved redesign of the Vega Pro.

We tested the Xiom Vega X for more than 20 hours to understand exactly how it plays, and therefore which players it will suit.

XIOM VEGA X REVIEW SUMMARY
The Xiom Vega X is a medium-hard, balanced, offensive table tennis rubber. The main characteristics of this rubber are its consistency and its grip levels. Its greatest strength is how confidence-inducing it is to use. In my opinion, it has the perfect arc, not too high, and not too low. Throughout my testing, I missed very few loops with it, and I could easily understand why I missed every time I did. Added to its control, the Vega X has good speed and spin levels. It’s not the fastest nor the spinniest rubber out there but it has more than enough power to finish points by attacking. Added to its great playing characteristics, the Xiom Vega X has a very enticing price. I am yet to find any cons to the Vega X, which speaks for its great design.

Perfect for: Offensive players of all levels on either side. 1-15+ years of playing.
Serve
Drive
Loop
Block
Chop
Benefits
Perfect balance of speed, spin, and control.
Very confidence-inducing.
Great for looping.
Very good value.
Superb at lifting underspin and countertopspins.
Easy to use, has lots of control.
Good for blocking.
Hard to bottom out.
Linear power delivery.
Ideal arc for looping and counterlooping.
Not too spin-sensitive.
Ball slippage is non-existent.
Great rubber for 3rd and 5th ball attacks.
Drawbacks
Not as fast or spinny as top-of-the-line tensor rubbers.
4.4

We recommend the Xiom Vega X to players who want to bring controlled speed to their game, aiming to return the ball back to their opponent in awkward and precise places.

Design of the Xiom Vega X

Inside, we can find the rubber, covered by a protective film.

The rubber we ordered is a shiny black, MAX thickness Vega X.

If we rub our fingers across the rubber, we find that it’s slightly tacky and very grippy.

As common in most offensive ESN rubbers, the Vega X also has a good deal of inbuilt tension.

Upon pressing on the topsheet, we find that the Xiom Vega X is a medium-hard rubber. It feels as hard as the Nittaku Fastarc G-1, for example. 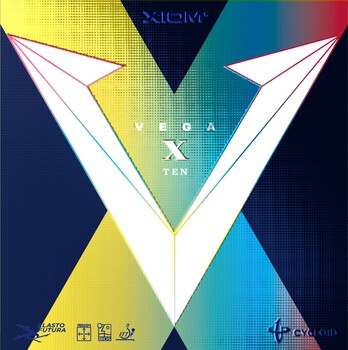 Summary: Create incredible levels of confidence with this European rubber perfect for offensive players at any standard of play.

We playtested the Xiom Vega X mostly on the forehand side, but judging from our tests on the backhand wing, it’s also an excellent choice for the backhand side.

The Xiom Vega X is very controllable for an offensive rubber. Its arc is medium to medium-high and it isn’t too fast.

The Vega X has all the gears. It isn’t too bouncy in the short game, but when you start hitting hard, you get more and more acceleration.

It’s a dream to use when looping. You can really feel the ball sinking into the rubber and it has more than adequate dwell time.

You never feel that the ball shoots off the rubber violently. It is very stable and controllable, and this shows especially when counterlooping.

Something I liked about the Vega X is that it isn’t prone to overshooting.

The Xiom Vega X doesn’t have a particularly high or long throw and it’s also not too fast, giving the player a lot of confidence when looping.

I found it similar to the Rakza Z in this regard. Both rubbers have plenty of grip, lots of clearance over the net and they aren’t too fast, so landing loops on the table feels effortless with them.

Another thing I really liked about the Vega X was its feeling. I felt like it was stable, spinny, and controllable. It delivers a lively feeling on the hand and it produces a loud cracking sound when hitting hard.

As for speed and spin, this rubber behaves like an average European tensor rubber. It has enough speed and spin for every level of play, including advanced levels.

The Xiom Vega X is a bit more about spin than speed, in my opinion. My forehand open-ups in particular carried above-average spin.

It has around 20% less speed and spin than a Tenergy rubber but this isn’t necessarily a bad thing. You get more control with the Vega X and it’s also more spin insensitive while retaining more than adequate offensive capabilities.

The Xiom Vega X is an excellent rubber for driving, looping, and flat hitting.

Drives clear the net easily and the lively feel makes it very tempting to hit harder and harder. The rubber will react to the amount of power you put in and keep adding speed to the ball.

Flat hits also work very well with the Vega X as its throw is not overly high and it has the right hardness.

The Xiom Vega X is an excellent looping rubber.

Loops travel with good power and are very consistent. I sometimes feel like I can’t miss the table if I’m hitting at 70% speed, and the rubber puts lots of spin on the ball.

Speaking of spin, one aspect I really liked was the spin it could generate on open-ups. The Vega X is not very fast but it has tons of grip, making it an ideal rubber for opening up against backspin.

You can graze the ball upwards and get as much spin as you want out of it.

Another highlight of the Vega X was its counterlooping capabilities. Countering close to the table is just perfect.

It has the ideal throw for countering. It’s not too high that you are likely to overshoot nor too low that you’re likely to clip the net.

In addition, it is not too spin-sensitive. However, at the same time it has more than enough grip and a long dwell time, so you can counter with lots of confidence.

When playing with the Vega X, I felt like I could play any shot I wanted and that the rubber would do the rest of the work.

The Vega X is also good when countering away from the table.

Countering away from the table requires more effort but it is a very consistent rubber, and it puts a lot of spin on the ball.

It doesn’t generate as much pace as the MX-P or the Tenergy 05, for example, but you can land as many balls on the table as you want.

The Xiom Vega X is a great rubber for serving and receiving.

Starting with the serves, it has tons of grip and you can load serves with spin. It’s also easier to keep serves short than with other faster offensive rubbers.

However, it wasn’t able to generate as much spin as the Tenergy 05 or the Yinhe Big Dipper, for example, and that’s why it didn’t get 5/5 for serving. Regardless, you’re still able to generate enough spin to cause your opponents problems.

In terms of receiving serves, the Vega X is also a very good rubber.

It’s also not as reactive to incoming spin as top-of-the-line rubbers such as the Tenergy range.

Blocking with the Xiom Vega X is very good.

The rubber feels firm, stable and it has the perfect speed for blocking. Again, it’s not fast to the point you lose control but not slow to the point that your blocks aren’t dangerous.

In addition, it doesn’t have a very high throw, so blocks stay lower to the net than with other rubbers such as the Tenergy 05 or the Fastarc G-1.

Chopping with this rubber was enjoyable, if unspectacular.

The Xiom Vega X has more than enough control when chopping, even on an OFF- blade and in maximum thickness.

I think the Vega X is a good alternative for modern defenders on the forehand side.

On a slower blade, it would chop a lot better while retaining offensive potential.

Lots of rubbers are really good when performing practice drills. You know where the ball is going, so you can play confidently and get good-quality shots in.

However, some of these rubbers don’t work as well when playing matches, given that they’re too slow, fast, or unforgiving.

I found that, when playing matches, I could hit the ball with a lot of quality while also having the possibility of landing several loops on the table in a row.

The Vega X is an excellent rubber for opening up, for follow-up attacks, for counter topspins, you name it. All of this is because of its high control.

Alternatives to the Xiom Vega X

A faster rubber with more spin. Perfect for more advanced players who want to upgrade their Xiom Vega X.

A medium-hard, direct offensive rubber that has great speed and spin levels.

The Xiom Vega X is an excellent rubber that can be used on either side.

It’s the perfect rubber for intermediate offensive players, in my opinion. Open-ups are controllable and have good spin, while loops and counterloops are very consistent.

However, beginners can also make use of the Vega X in its 2.0mm variant, and so can advanced players if they put it on a fast offensive blade.

As of writing this review, I couldn’t bring myself to take it off the forehand side of my main racket. I really like playing with it!

In addition, its low price makes it an even more appealing rubber for players all around the world. The playing characteristics are superb and it’s one of the cheapest ESN offerings in the market.

Find out how much the Xiom Vega X costs on Amazon

Find out how much the Xiom Vega X costs on a localised Table Tennis store.